THE SHROUD OF TURIN 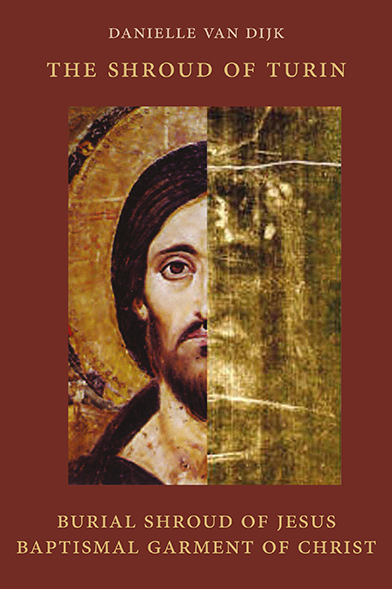 Finally in March 2014 prominent scientists managed to conclusively prove that the Shroud of Turin is not a fake and that the imprint on the Shroud has not been painted upon it. Likewise it has scientifically been proven that the carbon dating test from 1988 is entirely wrong.

It is most remarkable that the imprint of Jesus’ body on the Shroud is a negative image. Only when photos are taken of the Shroud do the details of Jesus’ figure become clear. Surprisingly the imprint is three dimensional. Nobody can explain in whatever way the imprint has come about. No scientific theory whatsoever has been able to explain the phenomenon so far.

Convincingly and carefully Danielle van Dijk gives a plausible explanation based on esotericism. The revelation of the secret can be found in the Body of Light of Jesus that is set free after His resurrection, which is a one-off and unique phenomenon.

In this wonderful book, full of authentic texts and beautiful illustrations, the author investigates what is told about this unique Body of Light of Jesus, which is the Resurrection Body of Christ at the same time.

Illustrated with more than 30 full-colour and black-and-white pictures.

Other books published by Danielle van Dijk: Christ Consciousness; A Path of Inner Development, Temple Lodge, Forest Row 2010; and Mary Magdalene, The Woman at Jesus' Side; A Search for the Hidden Aspects of Christianity, Cichorei, Amsterdam 2014, E-book.

Danielle van Dijk MA (1953) has been studying esotericism for over forty years. The Nag Hammadi Manuscripts and The Pistis Sophia are her most important sources of inspiration. She has been teaching at the Waldorf School (Secondary School, Stichtse Vrije School) in Zeist, the Netherlands, since 1975 where she teaches Dutch, (World) Literature, Philosophy and Ethics. She was also a member of the management team of the school and she currently gives lectures and workshops all over the Netherlands.